Art for Sale | Eyes Have It 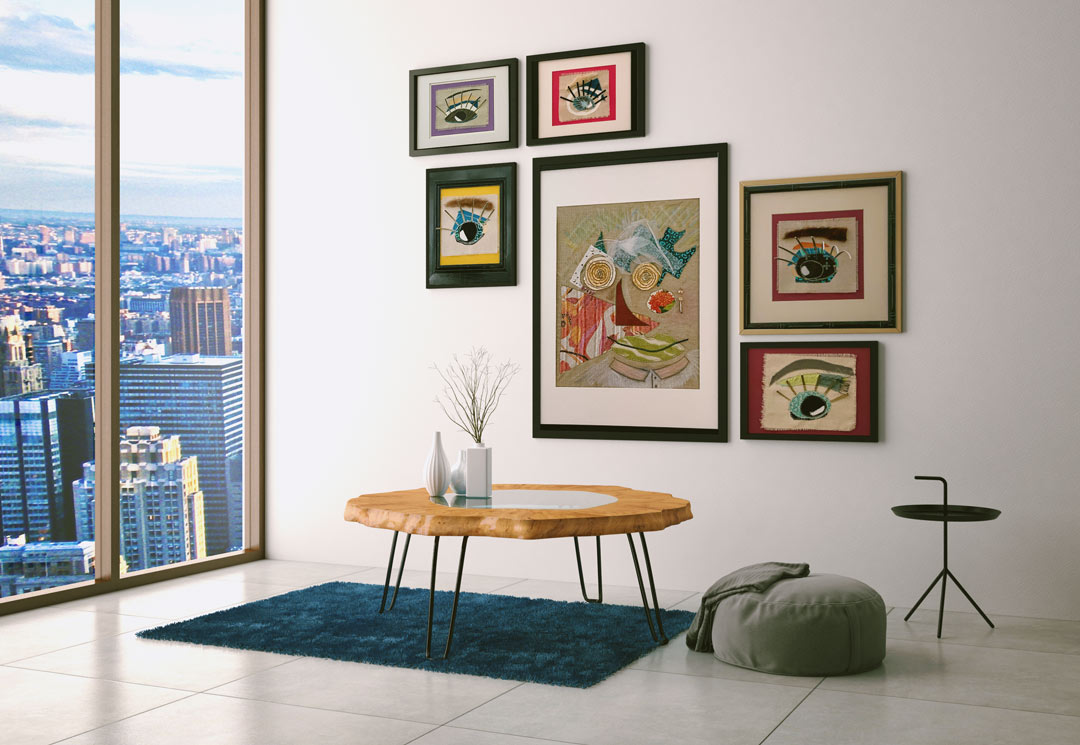 The Eyes Have It

While I was sorting through fabric and fur scraps, I randomly started piecing together some bits that turned into the shape of an eye.  I expanded on the idea, using scraps to create makeup and three dimensional eye lashes and eyebrows that pop on the background.  Various sizes, framed

Unique and intriguing, the eyes are a limited run series with a completely organic starting point.  While I was sorting through fabric and fur scraps, I randomly started piecing together some bits that turned into the shape of an eye.  I expanded on the idea, using scraps to create makeup and three dimensional eye lashes and eyebrows that pop against the background.

The finished pieces spent a few weeks hanging on the board in my studio – I was perplexed as to exactly how to finish them for framing.  In the meantime I had been gathering up frames from thrift stores and recycle shops, and was torn between a uniform look and something a bit less planned.  There was a stack of cardstock sitting on my worktable and it occurred to me that using that as a base was potentially a clever way to highlight the individuality of each piece, while using the dark frames would pull the collection together as a whole.

Limited edition mixed media, three dimensional art pieces; incorporating recycled fur and fabric scraps.  Mounted on contrasting 80 Lb cardstock and framed using thrift store and recycled finds.  There are a baker’s dozen and it’s not likely there will be any more.  Several of these pieces are currently exhibiting as part of a show at Howland’s Studio Gallery, located at The Hive on 16th, in Phoenix, AZ.

I really can’t decide if the correct idea is to pet it or carry it around.

Intriguing shape and lots of custom detailing make this bag a party stunner!

Bag Three – Finding My Own Shapes

Bag Three turned out to be a real stunner – an intriguing set of textures and patterns. It’s a pity that I don’t have more pics of it, but sometimes that’s just the way it works out.

Bag Four was a bit more difficult to make; I hadn’t created anything with this kind of structure previously. The main requirement was to be able to sit the bag on the handle of a rollaboard suitcase.

Bag Two – Not the Same At All, Really

Bag Two offered me the opportunity to design a bag completely from scratch. It also taught me I needed to learn more about how to construct a bag properly.

I built Bag Five -the original Micki – as a gift for my BFF. She wanted a bag that was durable, not too big, and with some specific features.

For two solid months, I couldn’t figure out what this scrap was trying to tell me.

The benefits of actually doing some maths become crystal clear on this build.